I’ve had this Nigel Slater recipe, courtesy of a blog called Simply Delicious, pinned On Pinterest for almost as long as I’ve had boards there. There’s just something about the blogger’s mouthwatering photo of the dish that made me long to a) make this, and b) in a lovely shallow Le Creuset. As I didn’t have a lovely shallow Le Creuset the recipe went unmade, but I’d look longingly at it on Pinterest every now and then, and then go and check the price of my object of desire in the vain hope there was a sale on. Patience finally paid off on Christmas day when Hubby managed to find one online for almost half price, so we splurged for it (it still wasn’t cheap!) and my beautiful new piece of cookware finally arrived this week. And I knew exactly how to christen it…

I love creamy white wine sauces. Once the alcohol burns off it leaves behind an awesome sweet note that just tastes of indulgence. And if there are mushrooms they always manage to soak that indulgence right up so that you get randomly intense hits of it whenever you bite into one. The chicken itself was perfectly tender and moist, which was a relief as we’d used chicken breasts rather than the acknowledged (and rightly so) more flavoursome thighs or legs.

Along with my lovely le crueset, I also got a fantastic Christmas present from an even more fantastic friend of a subscription to Cooks Illustrated – an American foodie mag – that had an article in it recommending that you start chicken and duck breasts skin side down in a cold skillet if you want properly crispy skin. It’s a French technique apparently, and gives the skin time to render its fat before the meat overcooks. I suspect I got impatient and turned my chicken too quickly, but even still the skin was definitely less soggy and sad than some of my previous attempts to brown it.

I’ve adapted the recipe to feed two to four by halving the ingredients in the original, so if you’re looking to make this for a larger group then it should happily scale up. And you don’t need a posh pan to cook it, a large frying pan should do just as well – I think a deeper sided pot like a stockpot, however, might now allow the alcohol to burn off as easily but that might just be me making stuff up (!)

We had this on rice which was absolutely perfect for soaking up all that delicious jup (an awesome Chinese word for sauce), not that my Chinese half is being biased or anything.  And whilst January is supposed to be the month for under-indulging after the holidays, it’s miserable enough if you ask me without stinting on comfort food every once in a while.

Hubby had already requested this again before he’d finished his plate so it’s probably safe to assume this was a success! I’m giving at least half the credit for that to my lovely new Le Creuset 😉  If you fancy a look at Le Creuset’s beautiful casserole range, check their website out and prepare yourself for some serious cookware desire! 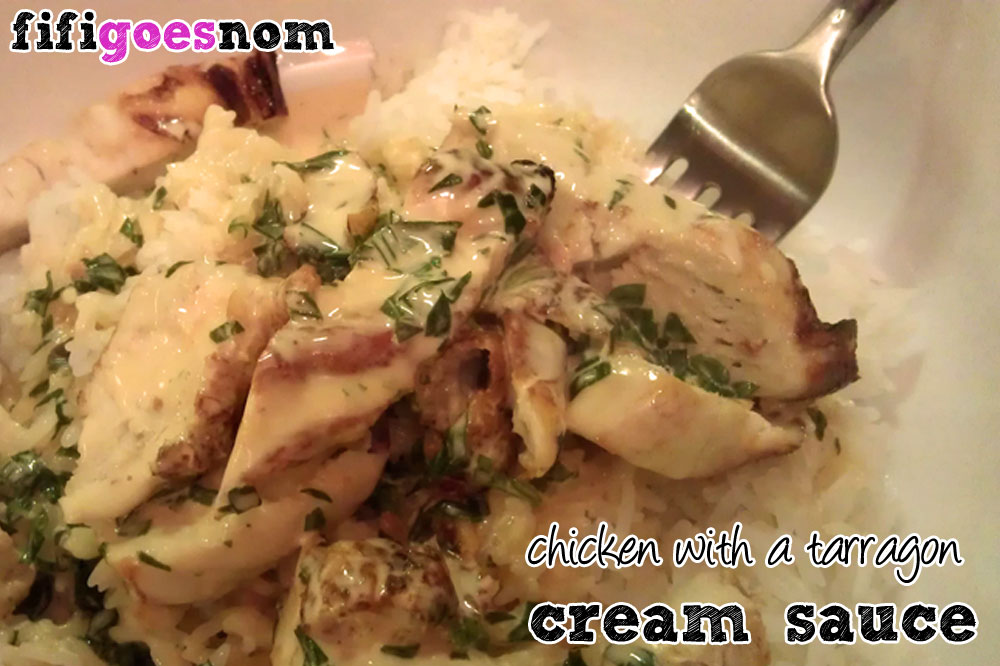 Chicken with a Tarragon Cream Sauce

Following my last post’s unusual tarragon and lamb combo comes a much more traditional one of tarragon and chicken, courtesy of my work chum Laura who tipped me off to this delicious recipe while we were raving about our mutual love of tarragon and James Martin, whose recipe this is. As you might expect from the cuddly host of Saturday Kitchen this dish doesn’t stint on the cream, but it’s absolutely luscious as a result and after one mouthful Hubby was already demanding that I make it again!

It’s possibly one of a handful of supper recipes that doesn’t use onion and/or garlic which I have to admit gave me a wee cause for concern, but the wine base and the tarragon are so full of flavour that I didn’t miss the otherwise ubiquitous bulbs a bit.  The lack of the usual vegetable prep work also makes this a really quick and easy supper to rustle up which, given how damn tasty it is, only makes this recipe better still!

Getting the chicken skin crispy on the hob is essential, not quite duck skin crispy but make sure it’s browning up nicely before it goes in the oven. The honey will do the rest of the work, not to mention adding a lovely sweet note to the dish without overpowering it.

Thanks again Laura, this one’s definitely a keeper 🙂 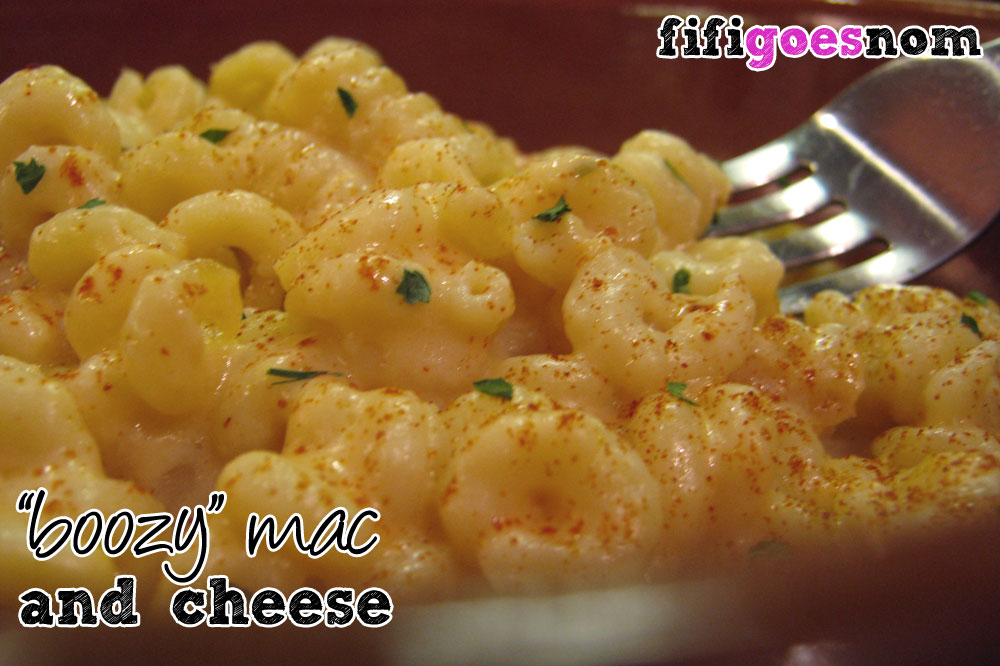 I used to dislike mac and cheese with an unholy passion.  It was at the top of my “things you couldn’t pay me to eat” list, together with fish pie and recognisable offal *boke!*  To be fair, I’m not a cheese fan at the best of times (and yet the stinky cheese board always ends up next to me at dinner parties >.<) but I blame my almost obsessive contempt for the cheesy pasta on school dinners whose mac and cheese was utter utter utter foulness!  It must have been made from a powder mix because it was always oddly gritty and a little watery.  I don’t think I ever touched it again after leaving school, not even in a poshed up Italian restaurant “four cheese pasta” style.  But you can’t be married to an American and avoid the stuff forever… So it was with huge trepidation that I agreed to let Hubby reintroduce me to this dish last year, and thank God I did because it is, quite honestly, one of my favourite things that he cooks for me now, much to his disbelief and amusement.

He also can’t leave well enough alone so it’s gone through several iterations, from a roux based sauce to a now wine based one (Hubby says – Thanks Heston!).  Not that it tastes remotely boozy, the alcohol is well cooked off to leave just the delicious flavour of the wine behind which sets the mixture of cheeses up perfectly.  Try it this way and I promise you’ll never do this with a roux again 🙂 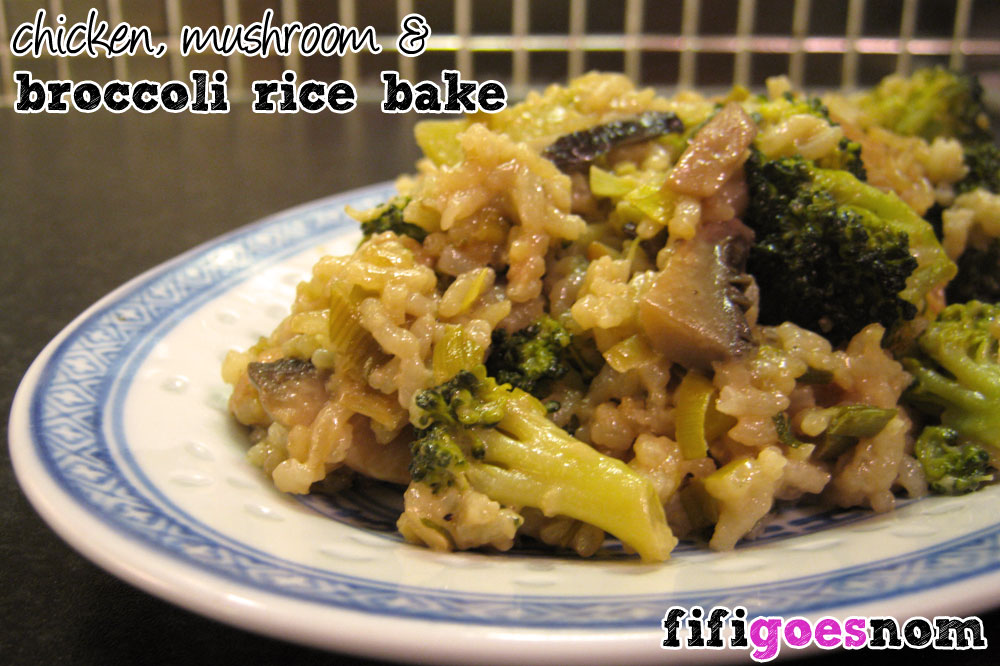 Well, as fifi mentioned in her last post, Autumn is right upon our doorstep, and with it comes crisp air, the rich, musty scent of Autumn leaves, and warming food that sticks to your ribs. Count me in!

Being an American, cold-weather food for me will always have to include casseroles, and this is just one of many that I like to foist upon Fi. This one’s a bit different though; a result of a lot of tinkering with combinations, that owes a lot of its influences to Asian flavours, and on paper, doesn’t look like it should work. Trust me, it totally does, and you won’t be sorry to try it. Other Americans may be tempted to cover this with cheese (let’s be honest, it’s the go-to topper for casseroles) but, while tasty, it doesn’t need it at all. This manages to be tasty and fulfilling without needing a lot of heavy cream and the like. Give it a try, and let me know what you think!

Without further ado, then… time to get cooking!

Chicken, Mushroom & Broccoli Rice Bake
2014-08-17 09:23:53
Serves 4
A delicious rice bake that is perfect for when the weather starts to turn.
Write a review
Save Recipe
Print
Ingredients
Prep!
Cook!
By Hubby
fifigoesnom https://www.fifigoesnom.com/

This is a favourite mid week/Friday night supper dish, perfect for when you’re tired and want something quick and fairly easy to rustle up that doesn’t skimp on flavour or comfort 🙂  I think it must have started off as a Carbonara, but time (and bad influences!) have morphed it into the boozy creamy pasta it is today that probably shouldn’t even be mentioned in the same breath as carbonara for fear of offending any passing Italians… But what this dish does have in common with Carbonara is that the sauce should coat the spaghetti and no more, rather than be something the pasta is swimming in.

What I really love about the sauce is how the wine gives it a slightly zingy note that really compliments the slight tang in the creme fraiche.  For all that I call this a “boozy” sauce, it should be the flavour you taste rather than the alcohol.

And if you’re feeling particularly lazy (and who doesn’t mid week) you can sub cubed pancetta for strips, but I do think the strips work better.  Streaky bacon also works if you can’t get pancetta strips, or if you just prefer bacon.