And now for something sweet! Sweet… and a little salty, because, you know, grown ups need treats too 😉

This is an adaptation of something a work friend, @emmypelle, rustles up that makes any store bought sweet treats taste like runners up!

My plan was to make it exactly as @emmypelle does but I got Hubby involved, and when Hubby gets inovlved nothing is safe from his tampering and tweaking (honestly, he’s a menace!). This time in the form of marshmallows, a very American ingredient when making rice krispie cakes apparently, which just made the bars EVEN gooier still! This is not a bad thing…

He also decided to get his artistic hat on with some white chocolate marbling which I have to say is really quite pretty! The salt was my single contribution in this whole thing, an attempt to give these delicious treats a bit of a grown up spin.  Also, who doesn’t love a little salt with their chocolate or caramel these days!

These are so easy to make that I think they’d be great for getting small kiddies into the kitchen to help.  I have plans to make these with my 3 year old nephew at Christmas, he’s already dubbed them ‘Oncle Heath’s chochocs’, which I fully expect to be as messy as it’s going to be fun 🙂

I have distinctly Northern Chinese food tastes, despite being Hong Kong born and bred, and always make a beeline for the fried noodles and fried dumplings first. That said, I won’t say no to a soupy bowl of wonton noodles if there’s a bottle of Chinese vinegar nearby to douse it in…  But at home there are only a few noodle recipes that I dare to cook myself, and I’m always on the look out for new ones to try. When I saw this on the frankly quite awesome The Woks of Life blog, the noodles looked too tasty to be true… (where true = easy!)

So so wrong that this is already become my favourite home-cooked noodle dish, hands down 🙂 It really does taste as good as it looks – slick, chewy udon noodles, loaded with satisfyingly savoury mushrooms that go perfectly with sweet bites of pork, and bak choy to round everything out. Seriously, what’s not to love? A quick marinade and quick cook time means you can be tucking into a bowl of these in about 20 minutes!

This recipe didn’t need any tinkering, it really was perfect as it was and the only changes I made were to ‘Britishify’ some of the ingredients. The real trick to this dish, for me, is slicing the pork nice and thin so that it doesn’t need much cooking and avoids getting all tough and chewy. The noodles, however, I just can’t resist leaving in the wok to get a little bit of char on them, because who doesn’t love that ‘breath of the wok’ flavour 🙂

The recipe uses a few store cupboard staples rather than needing a spoonful of something you have to buy especially, and then will forget to use again before it rots in the back of the fridge, which just makes it even better still. And the marinade is so simple but so flavoursome that I’ve even started using it with some old mum-taught Chinese recipes… shhhh! Don’t tell her!

As the weather finally hots up (and not before time!), mealtimes start to be less about comfort and more about avoiding spending much if any time near a hot flame, but without skimping on taste.  This old favourite ticks ALL of those boxes and is relatively well behaved to boot!  It’s also a one pan cooking dish which always makes me happy 🙂

To be honest, there isn’t much that’s Mexican about this recipe…  The only thing it has in common with actual fajitas is that they are both wrap based and hand held… There’s not even any  guacamole or salsa in sight!  But don’t let that dissuade you from trying this because what it lacks in Mexican authenticity it more than makes up for in tastiness.

The trick to this dish is to get that chargrill thing going.  It might look like it’s never going to happen, but have faith and persevere (and drain off excess liquid if you have to!).  The rewards are a sticky charred deliciousness of big big flavours thanks to the lime and chilli flakes, which marries perfectly with the sweetness from the peppers. 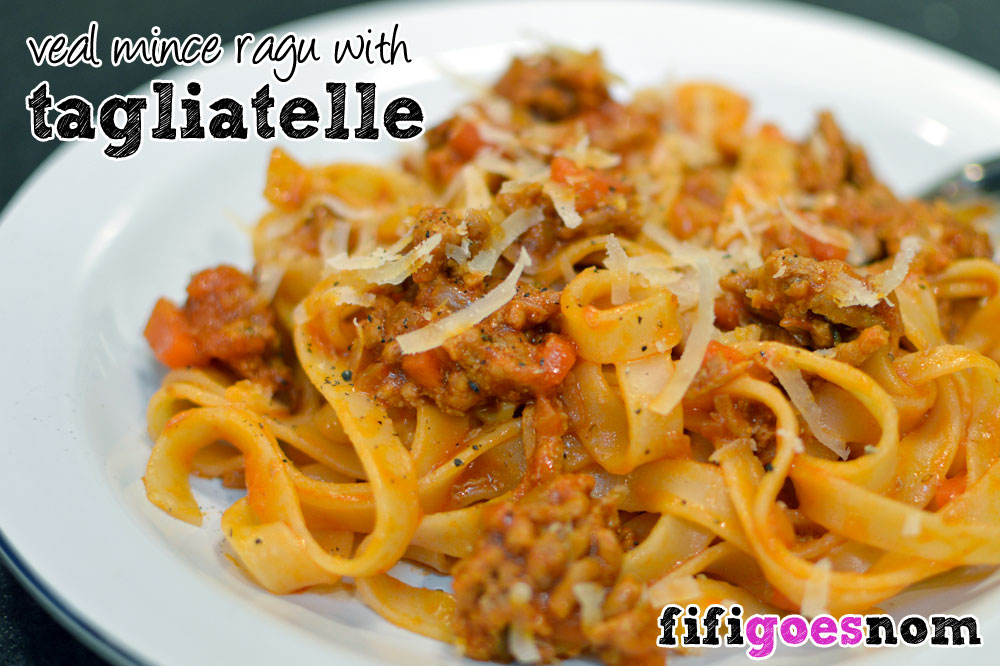 Spaghetti Bolognese is my go to comfort food.  It never fails to cheer me up or warm me up when needed, and even the act of making it is oddly comforting, go figure!  But sometimes you just can’t be bothered… Sometimes you just want the comfort without the effort.  Which is where this awesome new recipe find from Delicious Magazine comes in to play! Normally I’ll tinker with a recipe, but this is one instance where the recipe was perfect straight out of the box (so to speak!).

The veal makes this feel like a really indulgent supper, and I love how the sauce is rich but light thanks to missing out the ubiquitous can of tomatoes that goes into most ragu sauces.  The splash of red wine vinegar at the end helps cut through some of that richness, and adds a wonderful counter flavour to the otherwise sweet ragu.

I’ve said it before, and I’ll say it again, I love recipes that taste like they were hard work but are actually anything but.  This recipe is a perfect example of that, super easy to throw together but tastes like something that required an awful lot more time in the kitchen then it actually did.  And the long slow cooking makes it the perfect Sunday night supper 🙂

ps – if you don’t like veal then mince beef would work just as well, and appreciate the slow cooking just as much. 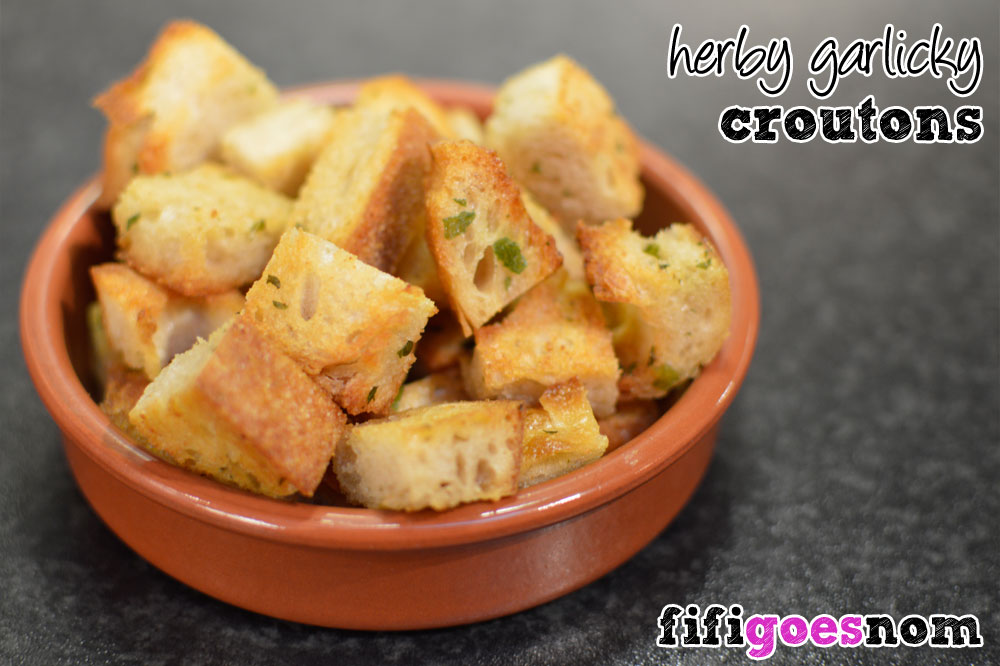 It’s soup season, and what is soup without croutons!

I’ve always been a sucker for these, whether they’re still crunchy or have been left in the soup just long enough to start getting all soggy.  Store bought is fine but honestly, you can rustle up your own in the time it takes you to heat up soup (honestly!) and they taste SOOOOOOOO much better.  Also, it’s a great reason to use up any half eaten loaves of bread (food waste bad!), just wrap the loaf up and sling it into the freezer until you’re ready to make these, and then take the bread out to defrost the morning you have soup in mind.

Any crusty loaf will do, you could even use good old sliced white if you were in a pinch, but Sourdough is my favourite bread to use for this. There’s just something about the flavour of Sourdough that goes so damn well with soup – if you’re looking for soup inspiration, we’ve tried the croutons with Hubby’s Roasted Butternut Squash Soup and my Cauliflower and Cider Soup and they were delicious in both!

The croutons will last for around two weeks in an airtight container, if you can actually exercise any kind of self control and not eat the entire batch 🙂