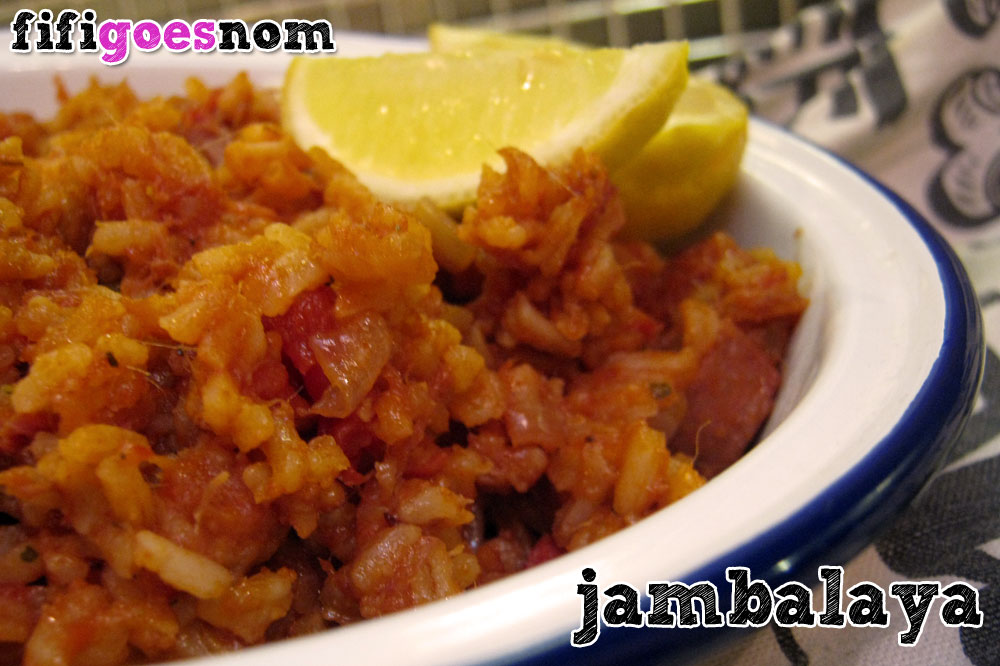 My kitchen is a happiest when there’s something spicy going down in it. I actually don’t think there’s much that Hubby and I cook that doesn’t involve some sort of spice, whether it’s of the fragrant variety or the heated.  This delicious recipe is full of both, and while it may look like quite the longest ingredients list don’t be put off by that as you can premix the dry spices ahead of cooking so it really isn’t as complicated as it might look, and the end result is well worth it.

A bit like the questionable authenticity of my Fish Creole, this jambalaya is more “Creole” than Cajun (it’s a tomato, or lack of, thing apparently!) and one of my favourite suppers that Hubby makes.  That said… it’s never quite the same twice because Hubby just can’t leave well enough alone, bless.  So this version is a foodie snapshot of how he makes it now. It’s not quite the way he made it six months ago, and no doubt it won’t be quite the way he makes it six months from now, but it is always delicious no matter how much he tinkers with it 🙂

You can make this with any combo of prawn, chicken, smoked sausage, ham hock or chorizo.  Hubby tends to go with two, three max, one of which is inevitably chorizo – it just adds another layer of flavour that compliments the paprika in the dry spice mix.  Fresh chorizo is okay but it has to be really good quality otherwise dried is better, just remember to peel off the tough outer layer of skin if you’re using dried chorizo before cooking with it.

Hubby eats this with potato salad… for seriously… He swears it’s a recognised accompaniment, and a quick Google seems to back him up, but that’s just one carb too many for me (something Hubby never thought he’d hear me say!).  I like to give mine a good squeeze of lemon all over instead, the sourness is a lovely counter balance to the spiciness of the Jambalaya.

As to why I like this quite as much as I do?  There’s lots of rice, which is always made of win in my book, the flavours are crazy intense, and it reheats really nicely the next day, which is just as well as there’s always tons of leftovers!

Chorizo pasta, with lashings of cherry tomatoes and rocket

Before I got married this was my go to dish at least twice a week (ok, maybe three times a week… don’t judge me!).  You could be forgiven for thinking it was because it’s so easy to make – I swear it takes longer to clean up afterwards than it takes to make it – and you’d be partly right.  But the fact that it’s insanely tasty and, with the abundance of cherry tomatoes and rocket, really fresh is what elevates it from just ‘an easy supper’ to a ‘a delicious and easy supper’!  And whenever Hubby goes back to the States without me, my tastebuds revert back to singleton status and it’s pretty much guaranteed that I’ll be getting stuck into a bowl of this before his plane has even reached the Atlantic!

Green and red pesto both work with this dish (Hubby prefers red).  I also tend to use the whole packet of rocket for two people, but that’s only because I love rocket (I am reliably informed that in America it’s called arugula). And if there are any leftovers (big big if in my household!) this is good cold, like a pasta salad, for lunch the next day.

I would love to credit this properly but I can’t for the life of me remember which foodie mag I found it in I’m afraid, but it’s so easy to throw together that there really wasn’t any need to hold onto the recipe.

By the way, please bear with me as I practice my food photography…  Today’s attempt is brought to you by Super Macro and standing really close to the counter 🙂