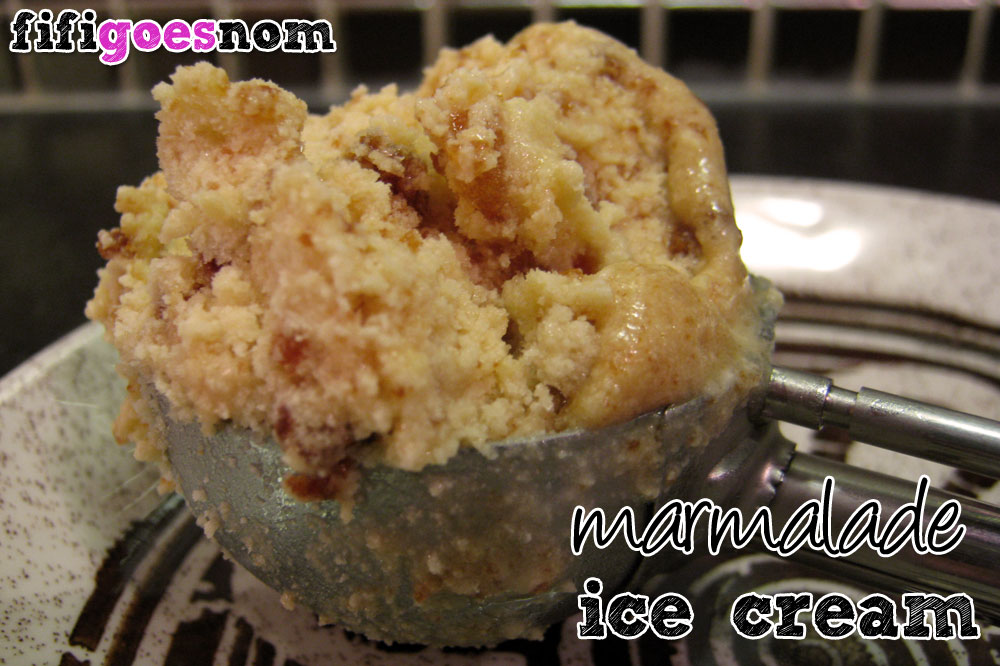 Marmalade on toast is one of my favourite things for breakfast, which is odd since I’m really not a fan of oranges and rarely, if ever, eat them.  Marmalade, however, I will scoff down quite merrily and any way I can – it makes a cracking sticky sweet glaze for cocktail sausages, an awesome steamed sponge pudding (it is the signature dish at The Three Chimneys on Skye and is deservedly legendary!) and thanks to this recommendation from my friend Ali B, marmalade also makes for an incredibly moreish ice cream flavour!

Legend has it that its name comes to us via Mary Queen of Scots, whose seasickness during her crossing from France to Scotland prompted her maids to cry “Ma’am est malade” and have the chef whip her up some of his sugary quincy seasickness cure.  I do believe this has been soundly debunked though… 😉

But I digress.  Back to marmalade ice cream, another perfectly Summery recipe!  I’ve adapted this from Claire Kelsey’s recipe as printed in The Metro a couple of weeks ago. Her version uses wholemeal bread and dark brown sugar to be the ‘toast’ to the marmalade, but the friend who tipped me off to this recipe used jamaica ginger cake instead, and I have to say the ginger marmalade combo is simply phenomenal, so that’s the way I’m blogging it.

If you’re looking to try making your own ice cream then this is a great recipe to start with as it doesn’t require an ice cream maker or any churning, just fold it and freeze it 🙂 The toughest thing you’ll have to do is decide if you’re going to go with shreds or without.  The correct answer is, obviously, with!  And one last thing, because it’s a no-churn ice cream the longer it’s in the freezer the more ice crystals will grow on it, so eat it quickly before it loses its creamy texture – trust me, this will not be difficult…